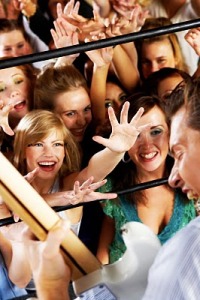 Imagine this
Your favourite singer comes to town and you are lucky enough to get a ticket to their concert. The atmosphere on arriving at the music hall is buzzing and even before the concert starts you know its going to be amazing. After what seems like an eternity of waiting the lights go out and the crowd roars with excitement. You can see some movement on stage as the musicians take their positions. The music begins, the crowd creates the loudest sound you have ever heard and BOOM! The lights come on and there they stand with a guitar strapped on singing one of their hits. You feel the chills run up your spine and are completely mesmerised. By the end of the night you are walking on air and totally inspired. Inspired to want to play guitar.
The Next Day
The next day you wake up eager to buy your first guitar. By that same evening you have purchased and unboxed your new toy but have no idea where to start. You research on the Internet but there are a million people teaching a million different songs and its all very confusing. You conclude that what you need is a teacher. After a Google search you find a few numbers, make some calls and before bed you have booked in for lessons and are ready to go. What a day!
Lesson 1
You arrive at your first lesson eager to get started. Your teacher proceeds to layout your practice schedule and some beginner exercises and to your excitement demonstrates a song you like just to show you whats possible. You are feeling good and ready to do whatever it takes to reach the point where you will be strumming and picking your favourite songs and perhaps even singing along.
6 weeks later
You send a message to your guitar teacher. “Really sorry but work is crazy at the moment and practice has not been good so I have decided to stop lessons for a while. Thank you for everything.” You tell yourself this story is actually true when the truth is more like “Sorry but I just don’t feel motivated to practice. Guitar was harder than I thought so I have decided to quit.”
The reason
Students often say that time is the issue but the real issue is motivation. In the above scenario the concert experience motivated the student to practice in the beginning but that motivation soon faded. What I discovered though years of teaching was a solution to this very problem. I would say to students in their first lesson the following – “Do you know what the number one reason people give for quitting guitar is?” I would let them answer and then explain the excuse they give is having no time to practice. I then asked if they thought time was going to be an issue for them. It almost every case they would say no.
Prevention
I would then explain the fact that time is not the real issue. Motivation is the issue. I would add a list of ways to stay motivated and to get through the times when they felt like quitting. Just by talking about it you are reducing the chances of it being a problem in the future. My student dropout rates dropped dramatically through a simple act of discussing the topic of motivation before it became an issue.