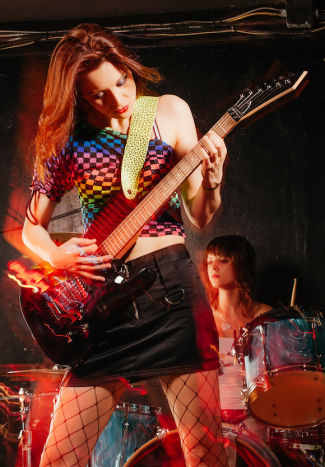 When I was 8 years old I received a guitar from my parents. Probably as a present but I don’t actually remember. In fact I can hardly remember much about the experience at all. What I do know is the novelty of guitar at that age wore off pretty quickly. I vaguely remember having a lesson with a local teacher and that was the end of it. At age 12 years I entered high school and soon made friends with a guy who played and owned an electric guitar. It was a Washburn accompanied by a Peavey amp. The first time I heard him play it I was hooked. About a year later I began drum lessons mostly because it seemed a logical choice. After all my friend played guitar and we wanted to form a band but while I was taking drum lessons my real passion was for guitar. It was the early 80’s and I was listening to Led Zeppelin, Pink Floyd, ACDC, Black Sabbath and a whole host of guitar based rock bands. Guitar was really the centre piece. So for the next few years I taught myself and the results were not good.

I was a typical teenager

I was not really interested in ‘learning’ guitar. I just wanted to be able to ‘play’ guitar. Just to clarify, learning is a process. The journey if you will. Playing guitar is the destination. I didn’t want to take the journey. I was hoping some magic genie would turn up and grant me three wishes. One of those wishes would have been to have awesome guitar and song writing skills but the genie unfortunately never materialised. By age 17 I was able to teach myself to play guitar to a basic standard but I as I recall I was frustrated most of the time. I felt disappointed that here I was some years later still feeling much like a beginner. My drumming skills were actually pretty solid despite the fact that I had done much less practice. I don’t recall whether it was out of frustration or my positive experience learning drums but, I decided to take guitar lessons.

Within 6 months of starting lessons with my guitar teacher my playing had gone from very much an amateur level to an acceptable standard. My teacher had also put me in a band playing songs from bands like Police, Yes and Phil Collins all of which required a reasonable level of skill. I could not have imagined playing songs of this standard a year earlier. At the time I didn’t give it much thought as to how and why I had made such a leap in my guitar playing. Was it the teacher’s advice? Was it that he motivated me to practice more? Or was it something else? It wasn’t until years later that I pondered this question. It took some thought but the answer became clear through a combination of my own teaching experience and reflecting on that short period of rapid learning. Here is what I concluded.

In a sentence my teacher focused on skills. I know it sounds simple and perhaps even obvious but the fact is very few teachers I have come across take this ‘skills first’ approach. The opposite to ‘skills first’ is ‘songs first’. Don’t get me wrong here. Having a list of songs you ultimately want to play is important but stay with me. When I taught myself for almost 3 years I was taking a ‘songs first’ approach. I began with a Pink Floyd song and then ACDC, Led Zep, Beatles and each time I would get frustrated and give up. I paid no attention to the skills required to play those songs. I didn’t understand anything about posture, finger placement, scales, arpeggios, picking and strumming techniques, bending, muting, music notation, theory and the list goes on. I was completely ignorant to the skills.

When a beginner student first begins guitar its highly unlikely they are thinking about skills. Whats first and foremost on their mind are songs. Guitar teachers unfortunately are not regulated in any way. This means anyone can teach guitar and it seems like almost anyone does. Most teachers want to keep the student happy so rather then take a ‘skills first’ approach they opt for ‘songs first’. This occurs because its what students want but what a student wants and what will ultimately be best for them are not the same thing. I use the example of climbing Mt. Everest. When you climb the mountain do you want a guide that will take the course you decide (based on no previous experience climbing Mt. Everest) or would you prefer the guide who decides on the best route up the mountain? The second option of course as your life may very well depend on it. Learning guitar may not be a matter of life and death but I hope the comparison makes sense.