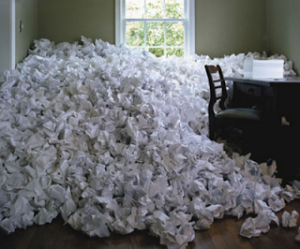 “Artists who seek perfection in everything are those who cannot attain it in anything.” – Eugene Delacroix (1798 – 1863)

There was a time when I believed being called a perfectionist was a compliment. To my former self perfectionism meant taking care of the details and never settling for anything less than a perfect result but as I came to realise this was not the best approach. Recent research has found that perfectionists are the most likely to actually never reach their goals and in extreme cases become frustrated and even depressed. If you have perfectionist tendencies and are learning guitar the following is worth noting.

The first problem with perfectionism is it’s lack of tolerance for failure. Those who are fixed on a perfect result in everything they do will spend most of their time being disappointed because perfect in anything is either unobtainable or comes at the end of a long and arduous quest. In other words perfection is only ever a fleeting moment at best. Imagine spending months practicing a song to perfection. You reach the perfect execution and for a brief time you can bask in perfection but within a relatively short period the song no longer excites you anymore than say your ability to walk. Yes there was a time when you could not walk and at around age 1 you perfected this skill. From that day forward the excitement of perfecting walking no longer thrilled you.

Try optimal rather than perfection

Tal Ben-Shahar Ph.D. is probably the world’s No.1 expert on the subject of perfectionism. In his book ‘The Pursuit of Perfect’ he goes to great lengths to highlight the importance of pursuing optimal outcomes over perfect ones. An optimalist aims for the best outcome but is not obsessed with a perfect outcome. As an optimalist you see failure as the best outcome given the circumstances but more importantly you see failure not as failure but just as part of the journey and a chance to learn. Optimalists know that life is about the journey not the goal. We spend most of our life in the pursuit of goals and for brief moments we enjoy the achievements but we quickly move on to the next challenge. Those who do not enjoy the pursuit itself will spend much of their life in misery. The perfectionist tends to spend most of their time being unhappy because perfection is rare. Maybe 1% of one’s life at best.

Paralyzed by the fear of failure

The perfectionist will often avoid attempting something for fear of failure. If they can’t be perfect the first time it’s safer just to avoid it. In terms of learning guitar the perfectionist will commonly make the mistake of trying to perfect each new skill or song each week before their next lesson. If the skill or song can’t be perfected in time they will find an excuse to either skip the lesson or avoid having to play for the teacher. A perfectionist guitar student will often divert attention away from the challenge for fear of failure and might say something like ” I really want to (or need to) learn a different song this week so could we take a look at that instead?” In many cases such tactics work especially with private guitar teachers who want to avoid making their students feel uncomfortable. A good teacher will see it for what it really is and  will look for ways to present the same challenges in a new and positive way.

I think we all have perfectionist tendencies and its really just a matter of being aware. As good as your teacher may be it is ultimately up to you or in the case of children their parents to recognise when you are perhaps expecting too much of yourself. Aim high but remember to aim for an optimal result rather than a perfect one. I remember hearing about a speech writer who at the time would write speeches for political leaders in the US. On this occasion he wrote a speech for Henry Kissinger and each time he presented the speech Kissinger would say “Is this the best you can do?” Feeling deflated he would go away and rewrite a new speech and again Kissinger would repeat “Is this the best you can do?” Eventually the speech writer said “I am sorry Sir but its the best I can do” and Kissinger replied by saying “Good. Well I will read it then”.