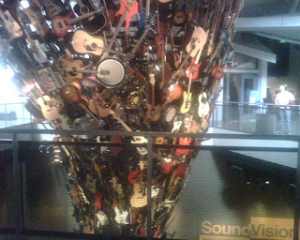 We have all seen the ads claiming that you can master the guitar in a few months or even weeks. These types of ads play on a part of our personality that secretly wants there to be a magic system of learning. This is the part of you that you really want to ignore because there is no magic system. There are of course good and bad methods but the best methods are the honest ones that make it clear that there are no magic spells. Its simply all about practice. In the following paragraph I am going to describe what typically happens to students who believe guitar can be learnt in weeks or months. The result is usually not good.

Let’s call the student Cliff for reasons which will become apparent. Cliff is full of enthusiasm at his first lesson and is ready to be the next guitar hero. Cliff practices like crazy clocking up several hours a day despite his sore fingers. He believes that at any moment his fingers will suddenly be blazing up and down the neck with the speed of Petrucci and the feel of Santana. After weeks perhaps even months of practice he suddenly just quits guitar lessons never to be seen or heard from again. For young inexperienced teachers this often comes as a complete shock. Some teachers even feel they may have offended their student in someway. They can’t believe someone like Cliff who was so dedicated could just stop so suddenly.

What happened to Cliff?

I choose the name Cliff not because I once had a student named Cliff who matched the above profile but because a cliff is basically a sudden steep drop off the side of a hill. If someone was running as fast as they can toward a cliff they would suddenly just drop. To the observer when Cliff reaches the edge he just suddenly disappears. I think we have all been like Cliff at some point. I  remember some years ago deciding I wanted to be super fit so I went out and bought all the gear, signed up to the gym and started an intense program of running, swimming, cycling and weights only to get sick a month later due to over training. My body was just not ready. I went over the cliff and it was a fast painful drop to the bottom.

Avoiding the cliff starts by being realistic about your expectations and mapping out a plan that will work for you. I have found that it’s better to start small and lift the intensity gradually. As with say fitness don’t begin by running marathons. Start with a stroll around the block. Guitar takes years to learn if you hope to play well so there is no rush. If you increase the intensity in steps you are less likely to overdo it in the early months and statistics show this is the time most people give up. Avoid becoming a statistic by easing into it. Guitar is not strenuous physically like jogging but mentally the effect can be the same or worse because at least with exercise you get a rush of endorphins afterwards.

When you go too hard you risk burn out so take it easy and set yourself up for life. The goal for beginners is to stay in the game and staying in the game is about pacing yourself. The real goal of any life long pursuit is to work on developing consistency. You should of course have clear and definite goals as these goals give you a direction but your practice needs to become a daily routine that works for you and the best way to find out what works for you is to start small and build on it. Some people can focus for 20 minutes a day others 60 minutes but what usually happens is beginners are most comfortable with 20 minutes a day and over time their practice sessions naturally get longer. The Cliffs of the world start out at 60+ minutes a day and soon find it tedious and quickly lose interest when they don’t get instant results. So start small and lower your expectations and you will not be disappointed.